Whenever we expect guests in our home, we prepare ice in the refrigerator prior their arrival, not after they arrive. Why can’t the same idea be used when it comes to cooling of a building? Can we be prepared for the next day’s cooling load of a building in advance? Because of ice storage technology, the answer is YES!

Studies have shown that buildings consume about 41% of energy usage compared to other sectors like industry and transportation [1]. Out of which, a major portion is consumed for heating and cooling. Commercial building operators often struggle to fully understand the different energy-saving approaches that are being pitched to them daily. The key to reducing the organization’s electricity bill without reducing consumption is through reducing the demand charge. Hence demand charge is the low-hanging fruit that can help buildings to lower their utility bill. And ice storage is the technology that can help to reduce this demand charge.

So, what is ice storage technology? 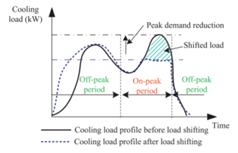 Thermal energy storage (TES) allows us to deal with the peak load problem due to cooling. It is a technology that stores the energy when the demand is low and allows it to be used when the demand is high. This technique plays a huge role in shifting the peak load of the buildings during the on-peak period and reducing the demand charge. Figure 1 gives us a glimpse of how thermal energy storage technology can help us reduce peak demand. The shaded region in the figure shows the shifted load due to the application of thermal storage in place of normal cooling load.

Due to the use of the thermal energy storage method, the spike of the cooling load during the on-peak period declines significantly. This technology has proven to be a significant method in meeting the building’s cooling load in an efficient manner. It allows the building to maintain a balance between the supply and demand of energy.

Ice storage technology (IST) is one method in thermal energy storage technique that helps buildings to lower their on peak load. IST uses ice to store energy. This is a form of latent heat storage technique as it is associated with phase change i.e., water to ice and ice to water. Since one metric ton of water can store 93kWh of energy, even a small storage system can produce enough ice to cool a building for a day or even a week, depending on the size of the building. The application of ice storage has already proven to be a boon in managing the cumbersome load of the buildings.

How does this method work?

Ice storage technology is a form of thermal storage technique which uses ice as a medium to store energy. It works on a simple concept of formation of ice and melting of ice to providing cooling in the building. This technology, in conjunction with the chiller, forms ice (as shown in figure 2) when the grid supplies electricity at a low charge which takes place during the night hours. During the daytime when the building is filled with occupants and requires cooling, the ice storage tank melts the ice that is formed during the night and supplies cooling to the building. With such a process, the chiller is either eliminated or partially eliminated during the peak hours as cooling is provided with the help of melting of ice in the ice storage tank. This leads to reducing the usage of the chiller during peak time hence reducing the kW associated with it. With the reduction of kW during the daytime, the demand charge is lowered to a significant amount.

Figure 2. Formation of ice in the ice storage tank [2]

At night when power companies’ time-of-use rates are at their lowest, the ice storage freezes water and stores low-cost energy in the form of ice. Then during the day when the time of use rates are highest the ice storage uses the low energy pump to transport the AC coolant through the ice to produce the cool air. This allows the energy-intensive traditional AC compressor to be shut off to minimize power consumption. The chill air is then distributed through the existing HVAC system . Thus, ice storage allows the lowest electricity rates possible.

Ice storage needs to produce ice and then this ice melts, acting as a cooling liquid to cool the refrigerant. For producing the ice, this storage technology uses the electricity from the chiller at nighttime when the demand is low, and utilities are charging off-peak charges. The graph in figure 3 helps us to understand the charging-discharging process of the ice storage where it shows that the ice storage prepares its ice during nighttime (charging time) and discharges during the daytime. Since during the daytime, the ice storage equipment is in function for cooling, the chiller doesn’t need to be operated thus helping in the peak demand charges. 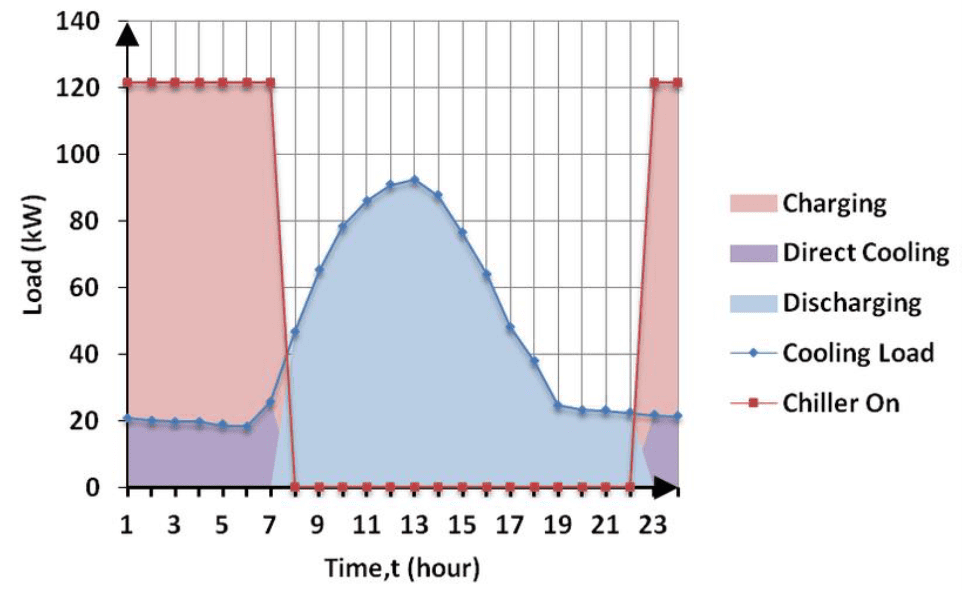 Modes of operation of ice storage:

In this case, the whole cooling load of the building is handled by the ice storage tank itself. The chiller does not operate during the daytime.

In this case, both the ice storage tank as well as chiller are in use during the daytime with the chiller handling the majority cooling load.

The majority of the electricity in a commercial building is consumed for cooling. This implies that chillers are the equipment which contributes to higher kW in the utility bill. Especially it contributes significantly to the demand charge during the summer days. When the ice storage is used for providing cooling inside the building, it either operates independently or in support of a chiller. This makes the chiller use less electricity during the daytime which reduces its operation time during the day. Hence it contributes very low to the peak demand bin comparatively it was when the ice storage was not in use. This also reduces the maintenance activity of the chiller as now the operation time has been lowered.

Ice storage is an environmentally sustainable technology. Most of the power that ice storage uses to produce ice is during the nighttime and power produced by the utility during this timeframe is its most efficient power. More efficient power means less energy usage and less energy usage at utility equates to lower air emissions and reducing greenhouse gases the utility is going to emit. All this helps the environment by making the power plant more energy efficient.

In the event of unexpected issues with the central plant chillers that would force them to shut down, ice storage is the technology that continues to provide cooling inside the building. The ice formed inside the ice storage tank acts as a backup for chilled water when the chiller fails to operate.

Ice storage technology has the ability to flatten the building’s cooling load profile. By flattening this load profile, the building becomes more efficient with existing equipment. It also diminishes the utility demand. The major concern of the utility bill reduction can be solved by the application of the ice storage tanks in commercial buildings. By using the electric energy during the off-peak hours when there are no occupants, the building can lower its demand charge caused due to cooling load.

Nine Things You Need To Know About The New Energy Code

ESG and SDG: What are they and how do they differ?

Get The Latest News!

Stay Up To Date!